Name of Project:Rehabilitation of Irrigation Infrastructure for kikafuchini Irrigation Scheme in Hai District

Kikafu Chini Irrigation Scheme is located in Kikavu Chini Village,Weruweru Ward,Lyamungo Division, in Hai District a distance of about 12 km from Moshi town. Kikavu Chini Village  is bordered by  Mijongweni village in the North; Ngosero and Longoi villages bound the scheme in the West; Mkalama village in the South while in the eastern part it borders TPC Sugar Estate.

Geographically, the scheme is located at Longitude 37o17’41” E and Latitude 3o26’27” S.The project area lies in the low land marginal zone where rainfall is erratic and inadequate, ranging from 400 mm – 566 mm per annum. The District has set aside funds through Small Scale Irrigation Development Project (SSIDP) towards the cost of implementation of the Irrigation Development in Hai District. It is intended that part of the proceeds of the fund will be used to cover eligible payment under the contract for the REHABILITATION OF KIKAFUCHINI IRRIGATION SCHEME.

The contract for execution of Rehabilitation of Kikafuchini Irrigation Scheme (hereinafter referred to as ‘’The Project’’) was signed on 8th December 2016 between the Project committee of Kikafuchini irrigation Scheme  P.O. Box 27, Hai and NURE BUILDING AND CIVIL CONTRACTORS LTD, P.O. Box 139, Hai. The project supervision was being done by staffs from Kilimanjaro Zonal Irrigation and Technical Services Unit in collaboration with the staffs from Hai District Council. Also, the farmers were involved in each process of the project implementation.

This report has been prepared to cover the progress made in the period between December 2016 to March 017. Appendix A describes the Work progress in photographs

B:Objective and outputs of the project as indicated in the original project document are listed below followed by detailed evaluation of project performance

a)Immediate Objectives (as in the original Project Document)

A.1Improved irrigation canal system with appurtenant structures for efficient water control, conveyance, distribution and management; (progress is being achieved step by step as now the irrigation canals are being lined to improve conveyance efficiency);

A.3Organised established and enhanced/strengthened capacity of the Irrigators Organization in sound water management techniques; crop production, O&M of their scheme for sustainability; (progress is being achieved gradually);

1.3Enhanced capacity of irrigators’ organization; (Progress is being achieved gradually).

The cumulative achievements of the project can be summarised as follows:

1.Longitudinal profile and cross-sectional surveys of 3 canals  with total length of about 1.373 km was done;

2.Topographical-survey of intervention area was done

3.Detailed site survey for the 3 canals  with associates structure was done

1.Design of 3 canals irrigation canals with their associated structures was completed and relevant drawings were produced.

Overall Physical Progress to date is 81.6%

E:Who will benefit from these outputs?

The achievements listed above will benefit different categories of people in Kikafuchini village by increasing irrigated area by 150 ha along Upareni Sec canal. Also lining of canals will reduce water losses through seepage and ensure reliability of water supply to the scheme.

The following visitors visited site to observe the progress of construction works during reporting time. The table below shows list of visitors who visited the site.

A rock of total length 126m and 57.1m3 was seen protruding along Upareni    secondary canal and taken care as varied works.

Big trees along kikafuchini secondary canal needed to be cut and uprooted by beneficiaries as part of their 20 % contribution towards the project implementation.

The project is very prosperous. Completion of the rehabilitation works will put the potential area of more than 150 ha into full production. The cropping intensity is expected to improve and the yield is expected to rise.

For smooth implementation of the project and in order to achieve output and meet the project objectives the following issues need to be addressed:

2.Farmers should turn up to avail their contribution timely in order to manage operation and maintenance of scheme. 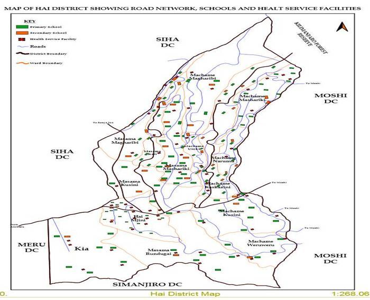